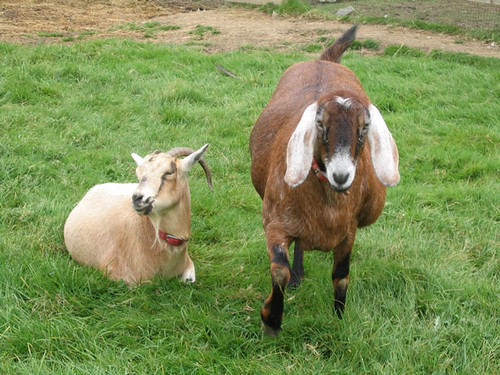 My focus is largely on my KrissyInBoston blog...so I don't post as prolifically on LJ as I once did. I'm mostly just keepin' up with friends and communities. Add me if you want, though. But I can't promise you it'll be interesting!

Considering livejournalling again. I keep a private journal, but I swear, now that I've got a kid there are an inordinate amount of posts about sleep and poop. But I kinda miss having an online journal! And I miss my LJ friends! :-)

Anyone still out there?

We're very, very lucky that people were taking tons of pictures at the wedding. I've been working on putting together an online album. Here is what we have so far, if you want to check 'em out: http://www.flickr.com/photos/munroemahoneywedding/sets/

This one's my fav of just me, as it amuses me to no end: 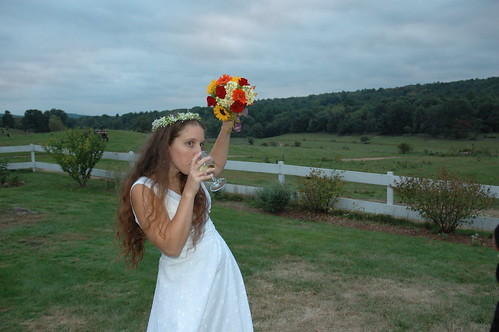 Sadly, there aren't a ton of great ones of just Matt and I. In fact, there are hardly any. Because we spent a half hour posing for pictures -- just us -- and honestly, throughout the reception we hardly saw each other because we were busy dancing and socializing with guests. :-( I'm going to have to crop some so it at least looks like there are some pictures of just the two of us.

Anyway, there are also some photos from the China trip, so check them out. I'm still in the process of uploading more from Shanghai, but I'll get to it eventually.

We came back from China on Sunday. On Monday, I received an EMAIL from Michael Blanchard Photography, our photographer for the wedding. He lost all of our photos. His hard drive crashed, and he had no back-ups. So, I asked him about the film photos. (We signed a contract and paid extra to have both film AND digital photos) He responded telling me that he decided not to use film, because he has had bad experience with film. I was in awe that he let us pay extra for film photos and then didn't follow through.

People have been sending us pictures they took at the wedding, but hardly any are of Matt and I. (or our family, or the bridal party) And the ones we do have are unusable. (Either bad shots, or too low of a resolution to print for an album) We have less than 10 decent photos.

I'm sick to my stomach. The guy refunded us our money, but it doesn't feel like enough. Memories of our wedding have literally been erased. We stood there (as well as the family and bridal party for the first half of the cocktail hour) posing for pictures for an hour.

I am so angry at this guy. First off, he won't admit fault. He keeps saying it was beyond his control. No, you piece of crap, it was NOT beyond your control. A professional would have backed his photos up. A professional would have honored a contract. This should not have happened. He is entirely responsible. It was also not his choice to make about deciding not to use film. He didn't even call me to tell me that he lost the photos. He emailed me. Coward. I feel betrayed by someone I obviously trusted.

We're considering taking legal action. (negligence + breach of contract) Sure, it's nice that he refunded our money, but that's really not enough compensation for a horrible thing that he did.

I just don't think he understands how badly he hurt us and our families. And I just want to feel better.

OK, I should have written this a week ago, but...I'm married, I'm married! 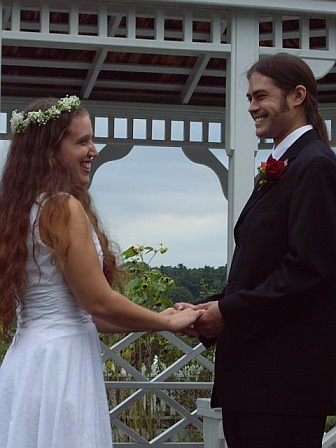 I have way more and am still getting more...I'll post a link to our Flickr page when the rest are uploaded.

Anyway, it was an amazing day. The food was fantastic, my dad made a hilarious speech, our friends performed (as the band) and we danced all night...I'm just very happy. :-) And on Friday, we're leaving for a family vacation to China. (Honeymoon to follow next year. My regular blog has more info on that. http://krissyinboston.com)

Hi folks. Hope all is well out there in LJ-land.

Not a lot new here. My grandfather passed away a few days after my last entry. It was rough, but not as rough as it was seeing him in so much pain. I stayed in New York for the week with my mother (my dad, sister, and Matt all had to get back to work)...we ate like queens that week, family cooking for us right and left! We also tried to comfort my grandmother, who is suffering from dementia and very confused. I visited her again a few weeks later. The Fung Wah bus company is certainly getting a lot of my money.

Anyway, for now I am ready to not travel for a while. All that back and forth to New York was exhausting. I have to go to California next month for my sister's graduation party.

Other than that, what else is new? Hmm. Been looking for more work but not having a ton of luck yet...Matt's band has been playing nearly one gig a week these days, which is awesome.

I was alerted by

buscemi via a "Livejournal Nudge" that I haven't updated in 21 weeks!!

- I quit my job about 2 weeks ago. Spur of the moment. Things got bad and I had to leave just to save my own sanity.

- I am back at looking to get into teaching. But job hunting around the holidays is nearly impossible. Hopefully things will pick up after the New Year. I want to go back to school too...I found a program I am hoping to get into and everything.

- My family left town on Sunday. We visited all the family down in NY over the course of last week. My grandparents aren't doing so well. :-( It was a little tough to see. But Matt made my grandfather very happy by asking about his music.

- Matt is doing well. He got a promotion at work (effective January 2) and is still in a billion bands.

- My endometriosis is being kept at bay. Between the surgery and the pills (they FINALLY found some that work) my pain is only a fraction of what it one was. On the other hand, I keep having bladder infections resistent to antibiotics (this has been happening on and off for about 6 years now)...the infections make me feel tired and rundown all over. A cystoscopy showed that my bladder is normal, so the infections are a mystery!

- I still read LJ, albeit less frequently now that I'm not working (most of my LJing happened at work) so I haven't forgotten about you guys!

They found endometriosis and removed it!! :-) :-) The surgery was rough (once I woke up from the anesthesia I was feeling terrible) and I feel pretty icky today...but they FOUND it!! mY BIGGEST fear was that they wouldn't find anything and we'd have no idea what was causing the pain. 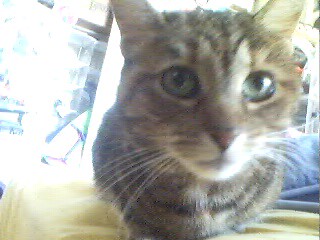 Cleo passed away yesterday. She was 14. I miss her.